// ReThinkCRM Form Code
In the News

Court of Appeals Rules for Madison in Billboard Case 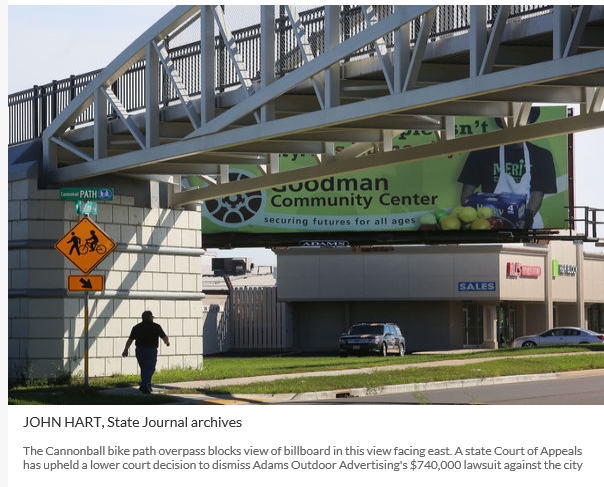 A state Court of Appeals has upheld a lower court ruling to dismiss Adams Outdoor Advertising’s $740,000 lawsuit claiming the city of Madison’s Cannonball bike path bridge over the Beltline blocks views of the company’s billboard from eastbound traffic.
The 4th District Court of Appeals on Thursday upheld Dane County Circuit Court Judge Richard Niess’ February 2016 dismissal of Adams’ lawsuit in a ruling that rejected Adams’ claim that blocking the view was an unlawful taking of private property.
The Appeals Court’s 13-page decision says Adams’ claim of a taking is foreclosed by two state Supreme Court decisions. One says that an unobstructed view from the roadway is not a protected property interest, and the other that a taking can’t be established because the property as a whole still retains some value.
The court also rejected Adams’ claims that the city violated its right to equal protection, was denied due process and that the bridge is a private nuisance.
“The city is pleased that the Court of Appeals, like the Circuit Court, rejected this unusual claim by Adams Advertising,” City Attorney Michael May said. “Our legal analysis, which the courts have accepted, showed that Wisconsin case law is directly contrary to what Adams wanted. The court correctly followed that existing precedent, law that cities and villages rely upon in making decisions.”
Adams, which owns most of the roughly 130 billboards in the city, including the two-sided sign on a small parcel at 2002 W. Beltline, could appeal to the state Supreme Court. Company officials could not be reached.
The lawsuit, filed in September 2014, claimed the city never consulted Adams when it was planning the pedestrian bridge, that workers trespassed on its property during bridge construction, and that the completed bridge blocks the sign from eastbound traffic.
After installation of bridge spans in late August 2013, Adams contended the west-facing, 672-square-foot panel was “100 percent obstructed” and the value of the sign and property “substantially devalued.”
The lawsuit was filed as the city mulled an ordinance eventually approved by the City Council that now lets companies under limited circumstances remove existing signs, “bank” the square footage, and put up a replacement elsewhere. Adams’ billboard near the bicycle bridge would not be eligible for the program unless a redevelopment of that property required removal of the sign.
Sign Up for our Newsletter!
Sign Up for our Newsletter!
// Make button functional