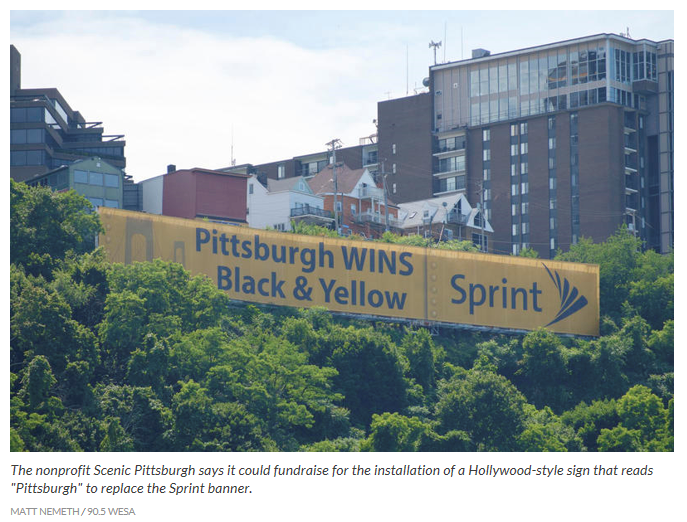 A Pittsburgh nonprofit wants to replace the controversial black and yellow Sprint sign on Mt. Washington with a Hollywood-style letter sign.
Scenic Pittsburgh sent a letter to Louisiana-based Lamar Advertising, which owns the 7,200-square-foot billboard, asking them to donate or sell the property to the organization. Lamar is in a legal battle with the city of Pittsburgh, which claims the company is violating zoning regulations.

One option for the sign’s future could be a coming soon banner for new businesses or something akin to Hollywood’s iconic hillside sign, according to Scenic Pittsburgh executive director Mike Dawida.

“It does not identify commercial activities, it doesn’t sell beer, it doesn’t sell chipped ham,” Dawida said. “It’s there to just tell everybody, ‘this is a beautiful place and this is where you want to come and see.'”

Dawida said if Lamar sells the sign, it could receive a tax benefit, since Scenic Pittsburgh is a 501c(3) nonprofit organization. He said the money could be raised for the new sign in the same way it was in California: by selling sponsorship for each letter.

Lamar said in a statement that Sprint will be offered a contract renewal before other advertisers are considered.

“The billboard has been, and continues to be a legal advertising sign for the past 80 years,” the statement said.

City officials have called the sign an eyesore and demanded its removal. They’ve fined Lamar up to $1,000 a day for violations.

Dawida said he thinks a donation from Lamar would put them back in the good graces of city officials. Plus, he said, a new Pittsburgh sign would only add to the iconic Mt. Washington hillside.

“We all watch all the sporting events that are here and we always take great pride in the fact that they always show a wonderful view of Pittsburgh,” Dawida said. “You’ll always see the Pittsburgh sign now if we get this done.”