Piccadilly Square to be Transformed with Massive LED Screen

Lights in 2017. Coca Cola and Samsung Continue as Advertisers 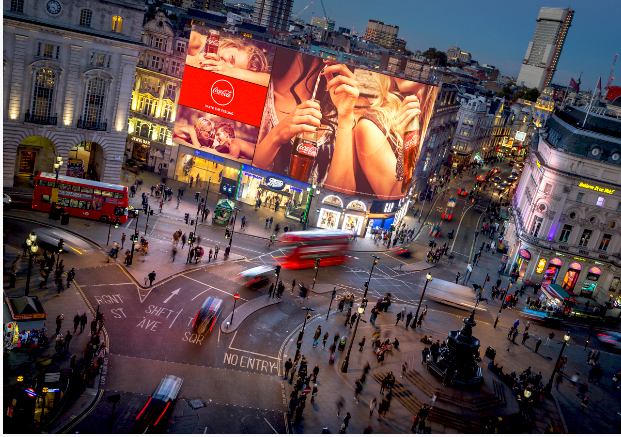 UNITED KINGDOM – Ocean Outdoor has won a contract to operate Piccadilly Lights, a central London landmark as part of a milestone upgrade to be undertaken by its owner, Land Securities.
The current patchwork of screens will be replaced starting in January with a single digital out-of-home screen to be completed in the third quarter of 2017. The new state-of-the-art LED screen will be 4K with an 8mm pitch, and measure 790 square meters, which will be the largest of its kind in Europe. The screen will be able to divide into six full motion segments, preserving the location’s famous mosaic appearance.
The fundamental change is that the existing six 16mm screens will be removed and in their place will be a single 8mm screen. This offers the opportunity for creative content to flow across the screen at dedicated times so that no advertiser is fixed in one location. It also allows at designated times for one advertiser to dominate the screen with multiple branding images.
“Ocean Outdoor won this tender because we fully understand the need to protect the status of the Lights, but also the need to transform them to maintain that iconic status. The solution we have developed retains the innovative nature of the Lights. Ocean also becomes the first OOH operator to introduce a one screen solution which ticks all the boxes in terms of fully responsive technology,” said Tim Bleakley CEO of Ocean Outdoor.

“Piccadilly Lights is one of the world’s most sought-after advertising sites, and this transformation takes it to the next level. Going forward we will work with all of the stakeholders to ensure the Lights remain a testament to London’s global reputation for defining invention and innovation.”

“This is a unique milestone for Piccadilly Lights, which has provided a visual home for much-loved brands for over a century. London is one of the world leaders for digital and technological innovation, and Piccadilly Lights is leading the way, engaging with global brands, global citizens and above all the local community,” said Vasiliki Arvaniti, portfolio manager at Land Securities.
Piccadilly Lights will have fast speed wifi, audience and car recognition technology and will become fully responsive to its environment (ie to the weather, audiences, traffic), deploying a dedicated leased fibre line to enable for interactivity, moderated broadcast quality streaming and various other feeds.
Coca-Cola, which has been present at the location since 1954, together with fellow incumbent Samsung, have confirmed their long standing commitments to the new Piccadilly Lights. For the first time in its existence, contracts for four other positions on Piccadilly Lights will become available from the end of this year,
representing a huge opportunity for global brands that were previously locked out of this world famous location.
“At a time when there are more advertising opportunities for brands than ever before, there are only a handful of advertising spaces in the world that are as iconic and unique as the Piccadilly Lights. The new technology will allow us to be more creative with how we use the space, providing new opportunities to tailor our messages in real time and engage consumers directly with our content,” Aedamar Howlett, Coca-Cola Great Britain and Ireland marketing director.
The new Piccadilly Lights are scheduled to relaunch in autumn 2017.
Sign Up for our Newsletter!
Sign Up for our Newsletter!