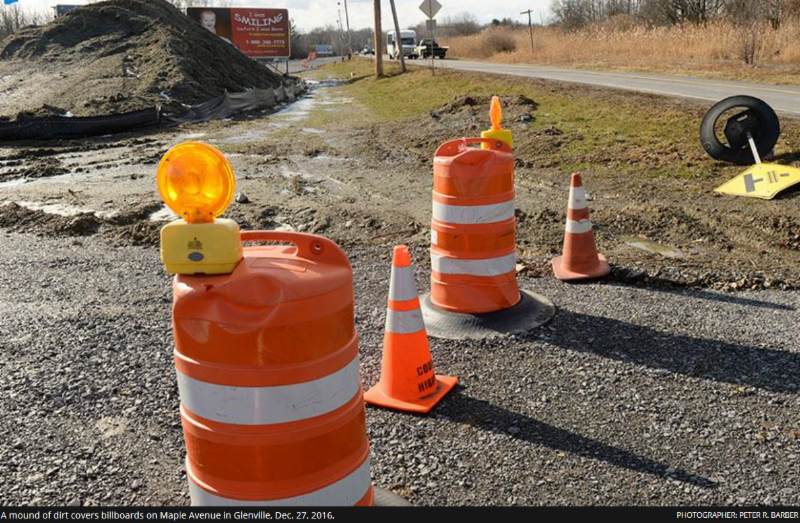 The realignment of Maple Avenue will go forward without the threat of continued litigation over two billboards located in the new right-of-way.
Lamar Central Outdoor LLC and Schenectady County have reached a $37,000 settlement after Lamar, which owned the billboards, sued the county in December.
The lawsuit by the national advertising company accused the county of bad faith negotiations and sought $50,000 compensation, but a court order filed Friday says the parties settled for $37,000, and acknowledgement that four other Lamar billboards along Maple Avenue will not be affected.
The settlement, approved by state Supreme Court Justice Vito C. Caruso of Schenectady, clears the way for the county to remove the twin billboards, which still stand amid the debris of the construction materials, though their final advertisements are now tattered and peeling.
Lamar had contended that the county took the billboards without following proper legal procedures. The billboards are on property the county is taking from Pan Am Railway as part of the road realignment. The county’s initial contention was that since Lamar’s agreement was with Pan Am, all the county had to do was notify Lamar that its lease was being terminated.

The billboards are in the area where a $1.1 million federally funded project is realigning a 1,900-foot section of Maple Avenue. Work started last year and is expected to resume soon, after being halted for the winter.

The realignment is eliminating a sharp hilltop curve located at the entrance to the Air National Guard Base. County officials said the project will improve road safety by eliminating the curve.

The county initially expected to use eminent domain to get the Pan Am land, but then struck a voluntary deal to buy 6.2 acres, including the billboard location, for $38,600. Lamar said in its initial filings that it was never notified.

Lamar said that the county offered it $25,000 in November 2015 — an offer that it rejected. Lamar instead sought $82,638, and to have the county pay the costs of relocating the billboard in the same general area. The company said the county ignored those requests.

Subsequently, the county reached its agreement with Pan Am and acquired the land. Last Sept. 23, the county notified Lamar that its lease was being terminated without compensation, leading to the lawsuit a few months later.