LED versus Static: Why Digital Billboards 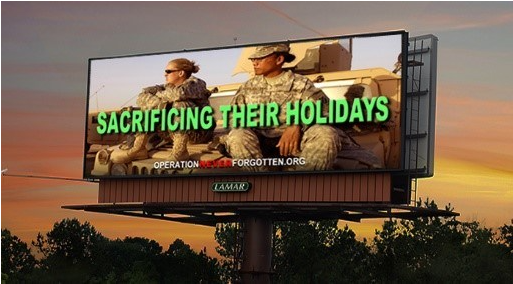 Cruising down the highway on the way to work, running errands while the kids are at school, or maybe a family road trip across the country; thousands of drivers a day pass by the advertisement you purchased on a prime location billboard in the hopes of boosting your revenue, but how many of them actually notice and absorb your message? What is the difference between the billboard your ad is on from the next one, and the next one? Now upcoming on the horizon is the new LED billboard freshly installed, bright, eye-catching. The driver can’t help but read its rotating messages as they drive past, first about the local ER, next a Cajun restaurant advertising a delicious looking signature dish just off the next exit, without realizing it the driver absorbed 2 messages in the 20 second window the LED board was in view.
However, your static message went unnoticed!
The length of digital billboard ads is a standard 8 seconds before the message changes and is part of a 64 second loop. Although you share the screen with other companies (Which is no different from running a TV, radio, or any other ad on a shared medium), travelers may see your ad multiple times during high traffic hours, and the billboard can be seen from a much longer distance. Due to the constant changing of the ads, driver’s eyes are automatically drawn to the motion and color so your ad is seen and absorbed more effectively than if it were on a static billboard in the same spot.
Another huge advantage of LED billboards is the appearance factor. With traditional billboards your ad would fade, peel, become dirty, or change color over time as it is exposed to the sun and other weather elements. The typical LED bulb last 100,000 hours or more, which translates to 11 years or more, so apart from a complete power outage the chances of your ad suffering from any rundown appearance is slim to none. 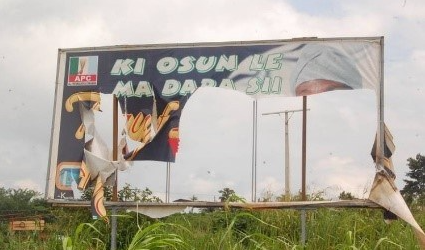 A massive advantage LED billboards have over the traditional static option is the ability to quickly change messages to reflect new marketing strategies, promotions, or pricing. Whereas in the past you would have to submit an order from the print shop, wait for the print to be fabricated, then schedule someone to go install the new print; now all that is needed for an ad to be updated/changed is a final digital proof emailed to whoever operates the billboard, which in turn can be instantly uploaded! Your company is even able to purchase more than one ad in the 64 second loop in order to broadcast multiple messages simultaneously as well as reach even more of your target audience as they drive by! 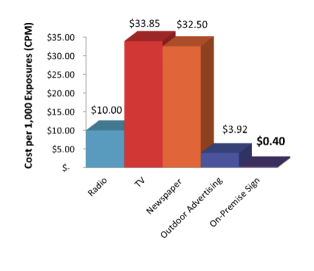 The biggest objection people have when it comes to the decision making process between purchasing an LED billboard ad or a traditional static billboard ad is the upfront cost. While it is true that the upfront cost of the ad purchased on an LED display is higher than that of a static billboard ad, the return on investment is much higher with the LED ad. An Arbitron Digital Billboard study found that almost one in five people discussed an ad they had seen on digital billboards with other people, and they also found the LED billboards to be more appealing to look at.  Also when comparing the cost of advertising on a billboard to other advertising mediums, besides an on premise sign at the location of your business, billboard advertising is by far the cheapest option available!
To further illustrate the effectiveness of billboard advertising in general, from the Arbitron Out-Of-Home Advertising Report published in 2013, 39% of adults who have viewed a billboard have visited a store they saw advertised, 40% visited a restaurant. 29% of viewers have been motivated to visit a store within a week after seeing a sale or special (which emphasizes the advantage of being able to update or change the message advertised on a digital billboard). Every business has a goal of using all forms of their advertising as a “drive to action”, with this in mind 40% of billboard viewers have watched a television program after seeing it advertised, 23% have tuned in to a radio station, 18% called a phone number for an advertised product/service, and 33% attended a public event or performance that was being advertised on a billboard. 40% of viewers noticed an ad that provided specific directions to a specific store, business, or restaurant location, and 26% have immediately visited those locations specifically because they saw the billboard ad!
There is a plethora of data available showing the effectiveness of billboard advertising, and as technology keeps improving and changing, the advantages of LED Digital advertising and AV equipment rental over the traditional static printed billboards keep increasing. Whether your business chooses LED or traditional, you are making a smart choice in how you spend your advertising money and how you implement your marketing strategy. However, the brighter, bolder, more colorful, and better engaging your message the more the viewers remember you!
Sign Up for our Newsletter!
Sign Up for our Newsletter!