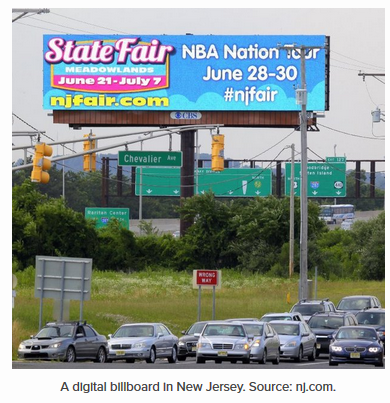 In 2009, E&J Equities sought a variance to allow the placement of a digital billboard in the township.  Because digital billboards were not allowed, the request was brought before the township’s Zoning Board of Adjustment.  The ZBA did not approve the application.
Thereafter, E&J brought an action against the township in state trial court.  The trial court found that the township failed to meet intermediate scrutiny because the ban on digital billboards constituted a ban on an entire medium of speech and overly burdened commercial speech.  On appeal, the Appellate Division reversed, finding that the digital billboard ban was a time, place, and manner restriction and that the digital billboard ban was content neutral and survived intermediate scrutiny.
The Supreme Court chose to analyze the law under the standard for noncommercial speech articulated in Clark v. Community for Creative Non-Violence and Ward v. Rock Against Racisminstead of the more lenient commercial speech standard in Central Hudson Gas & Electric Company v. Public Service Commission.  This choice was made at least partially on the basis that the record before the ZBA indicated that the proposed billboard would contain at least some noncommercial messages.  The court held that the ordinance was content neutral and further held that the township’s ordinance did not foreclose an entire medium of communication.
However, in analyzing whether the ordinance was narrowly tailored to the township’s interests in traffic safety and aesthetics, the court found that the township failed intermediate scrutiny.

The New Jersey court’s decision is a clear outlier given other decisions that have upheld local prohibitions on digital billboards.  The court appears to have followed a series of cases, beginning with the 2014 U.S. Supreme Court case of McCullen v. Coakley, that suggest that local governments have a heightened evidentiary burden in proving up the significance of governmental interests and the narrowness of the regulation.  At the same time, however, the opinion conflicts to some extent with earlier U.S. Supreme Court decisions-most notably City of Renton v. Playtime Theatres-in which the Court indicated that local governments are entitled to rely on the experiences of other local governments in establishing governmental interests and narrow tailoring.  While heightened evidentiary burdens have become the norm in cases involving public forum and panhandling bans, this is the first case since McCullen that appears to impose such a heightened burden in the area of sign regulations.
The effect of this case is to ensure that, at least in New Jersey, local governments should be cautious in ensuring that their sign regulations are justified by substantial, location-specific background research to support asserted governmental interests.
E&J Equities, LLC v. Board of Adjustment, ___ A.3d ___, 2016 WL 4916964 (N.J. Sept. 15, 2016).
Sign Up for our Newsletter!
Sign Up for our Newsletter!