Circulation and Opportunity to See

Two weeks ago, we talked about the circulation debate taking place in the out-of-home industry. I mentioned that how we measure circulation is not as important as doing it consistently, so that we compare one sign to a similar group of signs in the same way. The debate centers around the difference between two groups of people and how likely they are to see ads. So what is the difference between an Opportunity to See (OTS) a sign and a Likelihood to See (LTS) a sign? 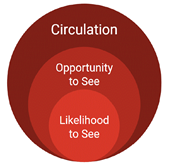 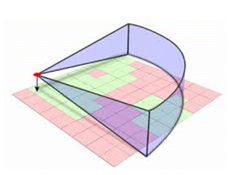 OAAA guidelines suggest that the Opportunity to See should be based on something called a “Viewshed.” Check out the Graphic to the right from OAAA’s recent guidelines. It is intended to show the area that is potentially visible to the entire audience. The viewshed is supposed to take into account things like obstructions, size, distance and position. These things are obviously included in a broader category that we call “visibility.”

The OAAA guidelines go on to say that a Likelihood to See should be based on “proximity of the ad, visibility or eye tracking studies or technology, the speed of traffic on the road, time based event and environmental factors” such as weather.

The big take away here is that circulation is impacted by visibility, so visibility should be considered when evaluating sign sites. One way that GeoPath used to measure visibility was through a Minimum Visibility Guideline. 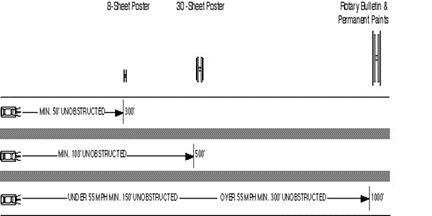 GeoPath’s old guidelines required a minimum unobstructed visibility for a specified distance during the final approach to a sign based on the sign size and (or) the speed of traffic in the case of Bulletins. That was a simpler time, but OAAA and GeoPath may want to pull out some of those old guidelines to establish some of their new visibility guidelines.